I work for an amazing company and over two decades ago, shortly after it it went public, growth was rapid and profits were abundant. The CEO would have these awesome company meetings where, after announcing another great quarter, would randomly tape $100 bills to the bottom of our seats, give away tickets to the Superbowl or have cash machines from which employees could grab at bills of varying denominations. One year, a colleague of mine won $5,000 in some sort of “Let’s Make A Deal” type game. I was in my late twenties at the time and my husband-to-be and I were in the process of planning a wedding that were paying for, mostly on our own. I really needed money. I remember being so envious that this woman, who lived in Darien and drove a luxury automobile to work, won this money. I was happy for her but, at the same time, the green-eyed monster reared his ugly head. I remember saying something about it and my friend saying, “Alicia, don’t be jealous. That isn’t flattering at all.” And she was right. 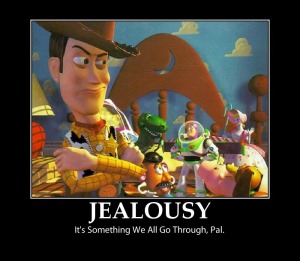 I try so hard not be be jealous. But i am not perfect and I shamefully admit that it is the deadly sin that I am most guilty of. As my Facebook feed is flooded with people on their Orlando-bound flights, I find myself wishing that I wasn’t spending my spring break working. Then I realize, jealousy is really about timing, isn’t it? I am a very fortunate person, my family and I have had some wonderful spring vacations to Québec, Disney, Pigeon Forge and Barbados. As we are posting our photos from our vacation we aren’t feeling so envious, are we?

I’ve had a lot of single friends become deeply depressed after their social media feeds were flooded with engagement announcements, wedding photos and baby pictures. I suppose the same would hold true for the unemployed when they see others are getting promotions or raises or the high school senior who gets rejected from every school they apply to while their peers get full rides from their top choices.

As someone who is active in the theatre arts, the opportunities to be jealous are omnipresent. It is especially difficult in a tight-knit community, where the people you are competing with are usually friends. As friends announce landing their dream role, or getting their first Off-Broadway/Broadway play produced, or launching their first CD, or publishing their first book, there is envy waiting in the corner of my mind. Anyone who says they are never jealous is lying. Again, it is all about the timing. For theatre artists, if you aren’t creating something, if you aren’t performing or writing or directing, you invariably find yourself wishing you were. When you are fortunate enough to have your creative outlet, it is amazing how quickly you forget to feel jealous. 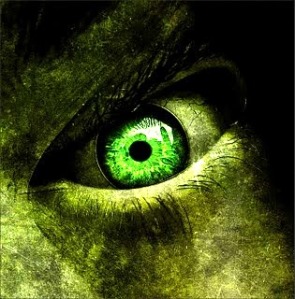 There are two things I am constantly reminding myself of when envy creeps her way into my thoughts. First, did I make the choice to put myself in a position of longing for another’s good fortune? If I chose not to do the work or invest the time in developing my creative endeavors, I have no right to be jealous. If I don’t write something, there is nothing to publish. If I don’t audition, there is no role to be had. If I don’t submit for directing opportunities, there are no productions to helm.

The second thing, and the one I find saying most often, is this: Another person’s success does not equal my failure. If anything, another person’s success should inspire me to succeed. So quit your bitchin’, Alicia! Work harder. Work better. And remember when you succeed, be gracious enough to inspire and give thanks. Be the person that other people are genuinely happy for.

And that usually kills the green monster.

One thought on “J is for Jealousy: Blogging from A to Z Challenge”