Normally, when the New Year comes, I don’t succumb to the trend of resolving to do things better, faster and/or more efficiently. Generally speaking, I don’t make resolutions because I believe that making them is a way of just setting yourself up for failure. I mean, who am I kidding? I won’t lose 30 pounds, I won’t stop having diabetes, I won’t stop living paycheck to paycheck and I won’t write the next award-winning play/novel. Does that make me a realist or does it make me a pessimist bound to fulfill her own prophecy? Hard to tell.

So began last year’s post about my New Year’s resolutions followed by a list of somewhat attainable goals. Looking back on the year, I can see where I succeeded and the many places I faltered. So, let’s take a look at last year’s resolutions, shall we?

Most of what I resolved to in 2014 will stay on the list for 2015. Since I am ever-changing and always looking to broaden my horizons, here are five more that I’ve added to the list for this year:

Every year is filled with challenges, some expected and most unforeseen. On the eve before my birthday, which also happens to be the start of a new calendar year, I am happy to have made it through the outgoing year without major incident and look forward to a new year with family, friends and experiences that make me the complicated, slightly imperfect but well-worth-knowing person that I am. 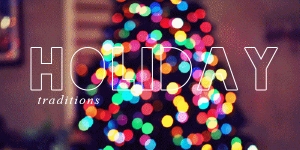 It’s Christmas Eve and, despite my most fervent attempt to be as prepared as possible, I still find myself frantically trying to get everything “just so” in an effort to make Christmas as joyous and memorable as possible. As I was tying the final bows on the packages, I found myself thinking about the traditions that my husband and I have carried down from our families and the ones that we have started on our own.

Christmas Around the House
If you know my husband, he is a BIG fan of Christmas. I mean huge. As in, when we retire, he’ll probably dress up as Santa and be at local firehouse pancake breakfasts. As soon as the last Thanksgiving leftover has been consumed, the house is bedecked in festive decor, the only music that is played in the car is Christmas music and every Christmas movie known to man is watched in heavy rotation. We used to end the film fest on Christmas Evel with It’s A Wonderful Life but we’ve changed it up in the years past, adding The Polar Express and Arthur Christmas into the mix.

Another tradition that we’ve incorporated is the often-loathed Elf on the Shelf. I’ll tell you, Edwin the Elf was the best ally when the kids were little. He was also the guy responsible for delivering the Christmas jammies on Christmas Eve, a longstanding tradition in our house. Now that that kids know the story behind the little guy, they take pleasure in hiding him and setting him up in a “scene” or two.

Holiday Open House
Years ago we would do a Harvest Festival in the fall, which is our favorite season. However, the number of birthdays, friends in shows and the conflict with Halloween tended to be a scheduling nightmare. Now each year we have a casual holiday open house, starting early in the afternoon and going until the last guest leaves. We try to incorporate some fun events, including a Yankee Swap and, new this year, an Ugly Sweater Contest. 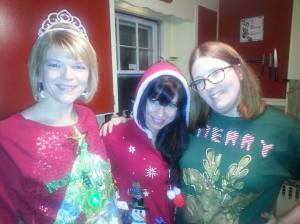 The Joe Iconis Christmas Spectacular
Since its inception, the Dempsters have loved The Joe Iconis Christmas Spectacular, which started at ARS Nova and has since taken up residence at 54 Below. The show features lots of irreverent moments with regular appearances by characters that include the Sweet Naked Baby Jesus, Drunk Mrs. Claus, the evil Ms. Needlebaum and the Christmas Angel. Joining Joe Iconis & Family are a bevy of Broadway stars that sing traditional and contemporary Christmas tunes including my absolute favorite: “Celebrate Christmas With Me.” I promise you, this is a Christmas concert not to be missed.

Christmas Eve Dinner
Growing up, given that my father’s second wife was Italian, I spent many a Christmas Eve enjoying the Feast of the Seven Fishes, followed by attending midnight mass and then coming home to a boisterous parade where the youngest in the family had the honor of placing the Baby Jesus in the manger display that had been prepared for his arrival. I miss those days. However, if I were even to suggest a Feast with Just One Fish, given nobody in my family really likes fish, I think there would be a rebellion in our house. Instead, we now honor the tradition that was started by maternal grandmother: we make a big pot of chili. While not as extravagant, I found it to be a great stress reliever, especially in the years when we had hours of toy assembly and gift wrapping that still needed to be done. My grandmother’s philosophy when preparing chili on Christmas Eve was simple. It was something that could be kept warm and eaten at your convenience, whether your were a new mom putting an excited 5-year-old to bed or a weary traveler arriving late in the evening. When you were ready to eat, there was a hot meal on the stove.

Snacks for the Big Guy & His Crew
Not a super-unique tradition, I know, but one we’ve always done. We leave cookies and milk out for Santa and carrots for Rudolph and the eight reindeer. When the kids were younger, we would decorate the cookies, which had a very large amount of frosting and decorations, much to the delight of my husband who would step up every year to eat the sugary treats.

The Christmas Pickle
This is a fairly new tradition in our house and one that neither my husband nor I did as a child. A tradition that is thought to have started in Germany, it is one that our decidedly un-German family has adopted. The night before Christmas, the pickle is hidden in the tree and on Christmas morning the kids hunt for it. Instead of bestowing a reward upon or promising good fortune to the person that finds the pickle, the lucky child gets to open the first gift of Christmas morning.

Christmas Morning
When I was growing up, nobody was allowed out of bed until my father went downstairs to confirm whether or not Santa had come to visit our house. The reality of it is that he was probably starting a pot of coffee. Once we came downstairs, we were scurried to the dining table to have breakfast. Mind you, we were never breakfast people growing up but on Christmas Day, you were going to eat breakfast by jove. Thankfully, our stockings were doled out and we were given a taste of what was to come. My husband’s family has a tradition of preparing Pillsbury Orange Rolls, which are eaten in the living room amidst the Christmas chaos. He has now added the additional sugary rush of Monkey Bread to the mix, in case the kids are lacking energy. For Mom & Dad, there are mimosas and Bloody Marys. I don’t recall any of the adults of my youth sipping adult beverages on Christmas morning but maybe it was because they were sipping them into the wee hours of the night.

Once the first gift has been opened, the opener then finds a gift under the tree for someone else and the family watches as each person unwraps their gift and selects the next. This is a nice way to spread out the events of the morning and to see what everyone has gotten. It also allows you to prepare the camera for those awesome moments when the recipient is thrilled with what they receive.

Another tradition that we have incorporated, that has proven to be a savior many times over, is the assembly of the Elf Kit: scissors, box cutter, wire cutters, screwdrivers, pliers and batteries in all sizes. The Elf Kit has saved us from many a meltdown for that impossible packaging that needs to ripped away as quickly as possible so that the kids can begin playing with their gifts right away. While it was more of a godsend during the younger years, I don’t care what Amazon says, there is no such thing as frustration-free packaging, even for adult gifts.

Christmas Dinner
I don’t think there was a really a traditional Christmas dinner that I had growing up. For some reason, I think if we were going to have a fancy Christmas dinner, it was a turkey. As the years wore on, we tended to go with beef of some sort – prime rib or a roast beef. However, my mother-in-law, who preferred to spend the day with her family instead of slaving in the kitchen, fed her family steaks on Christmas Day. Let me tell you something, this is the perfect way to have a nice dinner without hours of prep and frustration. When we are preparing the meal on Christmas Day, this is what you will be served.

It will be interesting to see what traditions continue as the children get old and what traditions they carry on with their families. One of the most important things we share with the generations before us and the ones that follow is tradition, whether keeping old ones alive or creating new ones. In the end, it isn’t the tradition itself, it is the memory of sharing them with those people that mean the most to us, near and far. May you and those people you hold dear make many pleasant memories this holiday season, ones that will sustain you in times of happiness and in sorrow for many years to come.