One of the great ironies of this day and age is how, with the advent of omnipresent technology, we have become more connected than we have ever been yet our ability to have meaningful connections with one another has grown more and more challenging. This notion serves as the through line for Matthew Lopez’s latest play, Reverberation, now playing at The Hartford Stage.

Jonathan (Luke Macfarlane) is a greeting card illustrator who lives an isolated life in his apartment in Astoria, Queens. Content to be ordering his groceries from Fresh Direct as easily as he does his sexual encounters from Grindr, he avoids any interaction that could compromise the protective shell he has so meticulously constructed around himself. When the free-spirited Claire (Aya Cash) moves into the apartment upstairs, she begins to scratch at the surface of a deeply wounded man and, subsequently, the two become friends.

Reverberation is the third play that Lopez has premiered at Hartford Stage and completes what he has unofficially dubbed his “Agoraphobia Trilogy.” His previous plays include the widely-produced The Whipping Man and last year’s Somewhere. In all three plays, the principal characters have withdrawn from a world they perceive to be threating and dangerous. Through his artful script and beautifully constructed private moments, the audience gets an almost voyeuristic view into the Johnathan and Claire’s lives, as well as the smitten Wes (Carl Lundstedt), who Johnathan summoned via the geosocial networking app.

In this play, Lopez explores the intricacies of intimacy in relationships, whether they are sexual or platonic, straight or gay. Through the three characters in Reverberation, we see how past relationships and personal experience can influence new relationships and how they are perceived. For some, a relationship based on shared thoughts and feelings can be more profound than a physical one, while for others a physical relationship can serve as the catalyst for seeking a deeper connection.

As a society, we have grown dependent upon technology and the constant link it provides. While the constant connectivity keeps us in touch, it also alienates us from one another. Throughout the play, Johnathan, who lives in self-imposed alienation, is insistent upon maintaining tactile relationships. He prefers his books over a Kindle, a newspaper over a newscast and, with his personal boundaries put in place, finds physical connection by comforting a distressed friend or having sex with random strangers. His desire to gaze into someone’s eyes, to connect to a memory via music or to hold someone’s hand is something he can’t let go and it reverberates from his past into his present, sometimes with unfortunate results.

Lopez has an aptitude for writing dialogue that makes it easy to become drawn into the lives of the characters he creates. Despite some of the intensely dramatic revelations that occur throughout the play, Lopez is able to find the funny human moments that often coexist alongside tragedy. However, the monologues tend to go on and begin to feel preachy or as though Lopez is trying too hard to be profound. The greatest moments in the play are the simplistic and natural ones. Additionally, there are certain moments that come off more as a mechanism to get to the next scene or moment. The lengthy and dramatic scene at the end of Act Two is followed by what felt like a very rushed ending of the play. 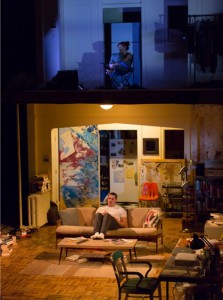 Director Maxwell Williams does a fine job pulling nuanced yet powerful performances from all three actors. Macfarlane delivers a charismatic and layered performance as Johnathan. Cash’s Claire is whimsical and heartbreaking while Lundstedt as Johnathan’s hapless lover Wes is both charming and poignant.

Andromache Chalfant’s set design, a massive two-story construction with identical apartments atop one another, is splendid. The scrupulous attention to detail to the set dressing, from the stacks of books to the refrigerator magnets, is a production unto itself. Matthew Richards’ lighting design splendidly provides the proper tone and Tei Blow’s sound design contributes a solid soundscape for the production. Linda Cho’s costume design is contemporary and fun, especially for Claire, who “borrows” several of her pieces from her employer.

Reverberation is a captivating play about contemporary interpersonal relationships and how we maneuver the obstacles that we face when attempting to connect.